Grace Messmer and Emma Moreno Sign Their Letters of Intent 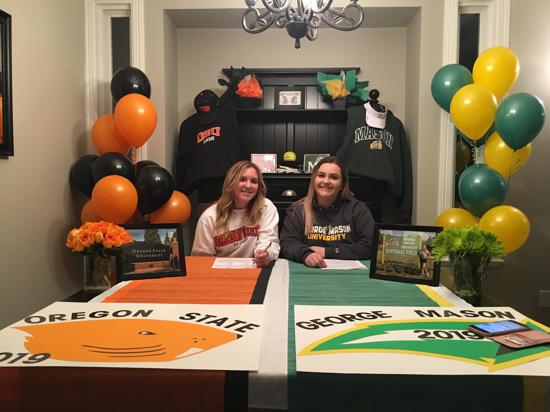 Congrats to  Storm 01A players Grace Messmer and Emma Moreno as they have signed their letters of intent. Grace has signed with Oregon State University and Emma with George Mason University in Virginia.

Grace has been a part of the Storm 2001 team since her second year squirt and has helped lead the team to 3 Provincial Golds , 1 Silver and 1 Bronze in the 5 years with Storm. Grace has also been part of 2 Gold and a Silver at the National championships. This past summer, Grace played with the Canadian National Senior Team at the Canada Cup in White Rock. Previously, Grace made and participated with the Canadian National Junior Team as a 16 year old competing against girls 4 years older, and led team Canada with .519 batting average at the Junior Worlds. Grace is not only one of the top hitters in Canada, her defensive play making abilities are outstanding. She again has been asked to participate in the Canadian Senior Team tryouts for the upcoming season. As well, she was Softball BC Minor Player of the year for 2017. Congrats Grace!

Emma Moreno is an original Storm 2001 team player with this being her 8th season with Storm. She’s won 3 Provincial Gold medals, 1 Silver, 1 Bronze, 2 National Gold Medals and 1 Silver. Emma was the National Champion MVP in 2016. Emma is a dominate pitcher with outstanding accuracy and speed. She works hard in the off season and it shows as every year as she is getting better and better.  She gives her team a chance to win every time they take the field.  Emma is a gamer, and the bigger the game the better she pitches which can be seen by the amount of Championships already won in her career with more to come. Congrats Emma!